Author: Vroomkart International
The USA proved the right choice for the 2013 Rotax Grand Finals. Top organization, awesome location, fantastic facility, truly outstanding racing from start to finish. But the core of the Rotax Grand Finals is unaltered, with its friendly, relaxed atmosphere making for an unforgettable weekend of motorsport.

We could look better
Independent movements generally shine of a light of their own everywhere, but the crystal ball where world karting is staged has lost that shine and in a way, this has also affected Vroom International.

At times like these it may seem utopia to convey the feeling that I have about the coming year to our readers. Well, there’s no harm in trying.
No doubt about it, it’s a positive feeling, one that puts me at ease and there’s a reason too: it’s the awareness of knowing our karting planet well thanks to the interest that operators from different countries in the world have towards communication. The group that’s been working in the background of this magazine saw this interest and, with some initiative, started to set up the right support to maintain this opportunity. Vroom International, a magazine that represents the karting movement on a worldwide scale, is ambassador of this ground-breaking project, without which it wouldn’t be possible to create the necessary media support in Spanish, Russian and Portuguese. With Vroom International and Vroom UK this platform has gradually expanded and registers the enthusiasm for this sport in countries all over the world (but it may well be that 2014 will have more surprises in store).
Well, it is thanks to this media support that I see the overall picture more clearly and better than I would have imagined. There are signals that reaffirm an unambiguous language of a movement that, despite being fragmented, it does transmit a distinct message of passion contagious like flu. A positive flu that doesn’t make you weaker, on the contrary, it improves the conditions all around, becoming bigger and stronger as a plague. And, after having seen the repercussions that some policies, which haven’t been at all far sighted, have brought about around the world, well it seems that 2014 will, at last, be a good year, one that will shine with a different sort of light. Karting and those who follow the sport have managed to come through well, claiming its real characteristics. Karting is a discipline that doesn’t betray, its charisma is unquestionable and as a result any promoter in any part of the world who helps to set up intelligent racing projects is acknowledged, with important promotional and commercial results. We have proof of this; first and foremost, proof gathered by Vroom International, and then recently picked up by other magazines with Vroom trademark. The strongest signals, this year come from the USA with the SKUSA series, but even more so by the Rotax Grand Finals, confirming that some programmes can only be a success. Great Britain is another important reference point that reflects policies aimed at capitalizing the promotion of karting. Putting it simply, karting just cannot be challenged, if anything has to be, then perhaps it’s the regulations and the organisation that look only to a financial return and hence generate speculation. This is something that ends up in creating disaffection instead of promoting the sport. However, karting has a natural defence in its DNA and some formats bring about a rejection crises.
Yes, the karting planet is livelier than ever, I assure you, and like a living organ, a natural selection has been set up strengthening some programmes and belittling those that want to keep the international showcase to themselves, without much creativity, common sense and vision.
Well, it looks like 2014 will be an interesting year, together with the awareness that the whole industry now understands what works generating interest, and what doesn’t creating doubts and little credibility.

The latter just can’t be overlooked because some competitions and achievements are the very essence of karting. And it would be advisable to offer the best showcase to the world watching us. Appreciating the skill of those drivers who win world titles, instead of letting it seem as though they have won a race like any other…
The World Champion is the Number 1, he should have a unique pass that enables him to make his way forward in motorsport, or at least have a special “title” that is worthy of a champion in this discipline. But, this is not the case! Despite our discipline is one of the few four-wheel categories acknowledged by the FIA (besides F1, Rally, WTCC and Endurance) the Number 1 of karting has little credibility (through no fault of his own) and this lack of consideration obviously affects karting as a whole. Therefore also Vroom International is affected, because the pinnacle of international karting events no longer offers us the opportunity for transmitting a constructive message. Interestingly, in some cases, we’d prefer not to give room to some events, as they don’t represent the best of karting… For instance, the events of the World Championship round in Bahrain, an event that ought to be more appreciated (see page 42), certainly aren’t constructive for the image of world karting. And yet, karting is not responsible for this regrettable situation... It is the policies of karting, and the people at the top level bearing the power, who should work harder so that this crystal ball where world-wide karting is shown starts to shine again, like pure sunlight. Me, well it’s several years that I haven’t been wearing glasses… sunglasses.

RACE REPORT – Rotax Max Challenge Grand Finals
The United States are the real protagonists of the 14th edition of the Rotax world finals. A class act that goes beyond the win of US driver Correa in Junior Max and of the USA in the Nations Cup, an all-round performance of countless ingredients that make such an event a big success.

RACE REPORT – CIK-FIA World KF & KF Junior Championships Rnd.2
Joyner grabs World KF Championship win and title, while in KFJ Alessio Lorandi awaits final verdict. But both categories reserved a surprise. Norris takes the Junior final but the title is pending, while in KF Joyner makes the most of Verstappen and Nielsen’s crash.

INTERVIEW – Giancarlo Tinini
After looking at the engines, we are now going to see how another very important element of a kart has evolved over the years, that is, the chassis or the frame, and to find out more we went to see what  CRG owner Giancarlo Tinini, one of the best chassis manufacturers, had to say about it.

TALKING TO – Richard Boisclair
With the single-make event of the season in the books, it’s time for a balance of the 2013 Rotax Grand Finals highs and lows. We wrapped it up with event organizer, MaxSpeed President Richard Boisclair, and make no mistake, his hard working, forward thinking attitude was key to pull it off.

TALKING TO – Tony Cruttenden
We talked to the man behind SuperTune, the British engine tuner that piled up 10 titles at the Rotax Euro Challenge, countless British and North American titles and the latest Rotax Grand Finals DD2 title with Simas Juodvirsis!

RACE REPORT – 42nd Industry Trophy
The driver from Brescia grabs KZ2 and dominates, while Lorandi has to give way to Vartanyan in KFJ. Other winners are Ilott in KF2 and Abrusci in a very hard fought 60.

TEST – Modena Engines KK1 Racing
Besides the standard engine, Modena Engines also supplies a “home made” version of its gear class KK1. Let’s take a look at the differences. 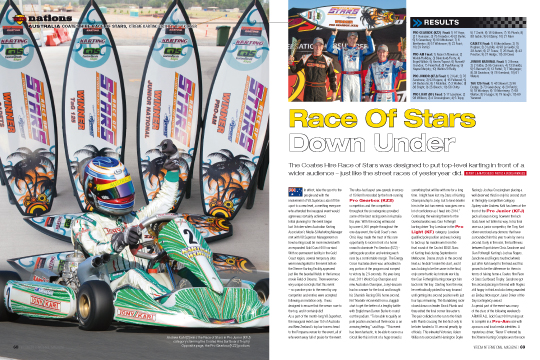 NATIONAL RACES
With the racing season over in most countries, we report on the Portugal Kart Cup held in Braga, and Australia’s Race of Stars organized in collaboration with V8 Supercars management. 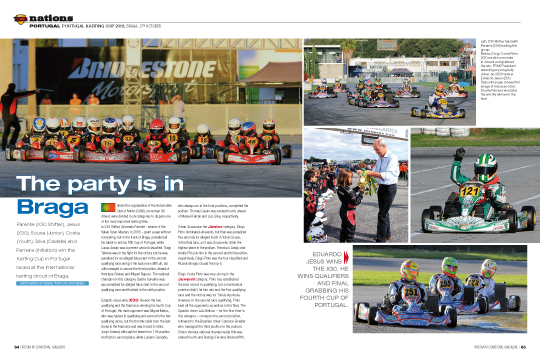