Author: Vroomkart International
As strange as it might sound, two of the most renowned gearbox drivers of the past few seasons, Max Verstappen and Emil Antonsen, grabbed their first ever CIK title in Genk, Belgium, after an action-packed final round. We dedicate a whopping 24-pages section to the event, including a teaser preview of the explosive Euro final for direct-drive classes in Ortona.

Max Verstappen (Crg/Tm) and Emil Antonsen (DR/Tm), two drivers who can boast years of international experience, grab their first CIK title at the circuit in Genk. On Sunday, the final win was in contention to the end – and to the last lap in KZ2 – with several changes and suspense worthy of a Hitchcock thriller.

Our photographic gallery from the decisive round awarding the continental crown.

Karting Genk is renowned for hosting brilliant events that draw the attention of many local and international visitors coming from bordering countries. We are taking a look at what it takes to make a successful event with Karting Genk circuit manager Boy Pijls.

Emil Antonsen is the 2013 European KZ2 Champion. Often perceived as the underdog, more often than not outshined by his more extrovert team mate Riccardo Negro who boasts a solid international pedigree, the Norwegian driver has conquered at last the continental crown he’s been chasing since his early karting days.

Two brands two products wanting to stand out and be seen: at the “7 Laghi circuit” in northern Italy, we tested the TBkart S55 chassis coupled with the Modena Engines KK1 in the “advanced” version and here you can read how they work.

Our column on how to get out kart back into shape continues, this time we are going to see ho to re-assemble the elements connected to the steering wheel correctly: this is an operation that must not be underestimated if you want to be sure that your kart works properly when you go round turns… As usual in collaboration with Japan Kart and the Ochadans

GARAGE – Making the most of Summer

Here is some advice on how to get your kart ready for the warmer environmental temperatures, so that setup doesn’t suffer much even when track temperatures are Saharan. 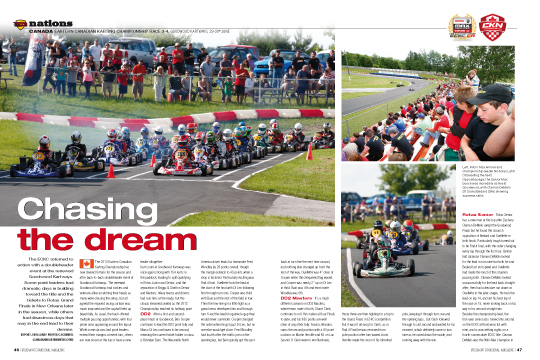 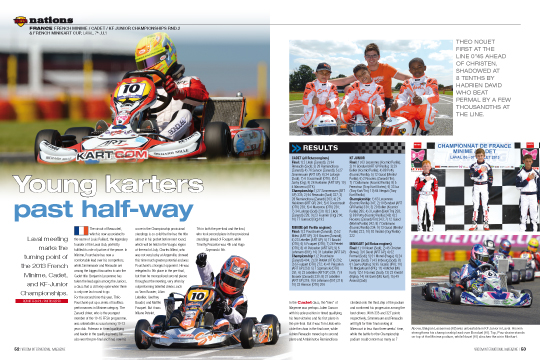 The news section opens with the preview of the European KF-KF Junior Championship final round in Ortona. We present in a world exclusive the new MKI Monaco R1 aerodynamic kart; also, we paid a visit to BRP Rotax Headquarters in Austria; Modena Engines announced the final approval of its KK1 model; we present the 2013 edition of the Ciao Thomas Knopper Memorial race.

Our younger readers’ parents will find an example NOT to be followed in our VroomMama dedicated column.

The closing column dedicated to the national and international calendars for the month of September lists 51 major national events from 21 countries, as well as 5 international races.