Author: Vroomkart International
Sure was it exciting, but it was also another dozen things. The opening round of the CIK-FIA European KZ-KZ2 Championship didn’t fall short of expectations, the ingredients were all there for a brilliant motorsport event, and even the weather ended up being clement. Once again, gearbox karting proved to be the real deal of the discipline, with some outstanding undisclosed potential yet to be unleashed...


The power of Karting

This is an important moment of the karting season and the first round of the European Championship has amplified this positive sensation that is expanding in the international movement. We have had confirmation from Wackersdorf that the gear class is always the top racing expression of this motorsport discipline. The show that comes through has no equal and the competition is exciting for spectators. There is a reason for it! The class has reached an interesting level now as it responds to a karting philosophy that works. In fact the KZ2, the cadet of the gear class in particular, has been protected by stable regulations for about twenty years now. And it is for this reason that also the international breeding ground aims to support this format that guarantees a formation and evidence of incentives for young kart drivers and for the future in cars. This way the whole discipline gains from it.

Also as far as the Italian breeding ground for pilots is concerned, the results are encouraging. The first round of the European KZ2 Championship confirms not only quantity but also quality. This is an important signal for karting that should induce everyone to work hard to safeguard this category so that it continues to produce benefits and consolidate the prestigious position it has gained. This reference is very important for re-launching the sport. It is the accredited apex for a propedeutic and technological solution that has ever come up. So that all that comes before (direct drive classes) may have a sense because there is an aim, a goal that each driver aims for to be successful in this exciting adventure. KZ is the F1 of karting, and it is right that this position is acknowledged and valued.

More work needs to be done on what has happened at Wackersdorf, the difficulty of applying the noise limit norm to 108 db must be seen to. And also the formula of having 2 prefinals for selecting finalists (KZ2) isn’t very convincing. Credibility of these events rests on respecting the rules and in the driver’s satisfaction. You must be professional.

Just over the page, you will find a picture with a very important meaning, and not just for us. It is only right for our readers to see how your reference magazine continues to gain acknowledgement in countries all over the world. And this result isn’t just thanks to the digital era we live in. The good thing about our project on global information groups together, and at the same time reflects, the “modus operandi” that for 25 years has made this magazine stand out. Our satisfaction and acknowledgement goes to all those people who for passion and dedication have decided to share this project, with the aim of communicating in their own country with the same editorial line produced by Vroom. This is how Vroom Spain and Vroom Russia & Ukraine started their adventure. And probably in the near future there will be more clones of the most popular karting magazine; these too will be made in countries of origin.

I’ll take my leave now till the next issue; the best is yet to come.

In the first round of the gear-class European Championship in Wackersdorf, Verstappen in KZ, Negro and Zanchetta KZ2 are protagonists. They are the drivers that everyone bets on on the eve of the final, and they confirm the skills that have made them stand out since the start of the season.

After the much talked-about collaboration between the CIK and WSK Promotion, CIK Vice President Kees van de Grint shares his thoughts on the first ever CIK event managed by the private organizer. Is it truly the beginning of a new era for karting?

HOW TO DRIVE – Ortona International Circuit

Let’s take a look at the latest innovations at the circuit in Abruzzo that will be hosting the second round of the European Championship for the direct drive classes, new turns that bypass the chicanes and in the background the second highest point of the Apennines.

Former Australia national champion Adam Graham has joined the ranks of those who made karting their profession. After a spell in car racing, Adam came back to his first love with the goal of becoming successful, but no longer as a driver. We met Adam at the first round of the European KZ Championship in Wackersdorf with his two drivers, Chris Hays and Jason Faint.

Now at its fifth year, the Sodi event has proved to be really brilliant, once again a fantastic show case for Rental Karting, at high level, almost at a professional level technically speaking (few breakages despite the number of karts used), as for the drivers (very fast and highly competitive), the organisation was fantastic (brilliant work done by men from Sodi and great support given by the Racing Kart de Coirmeilles circuit).

In sport as in life you become a winner by using your head and leaving very little to chance. “The difference between one champion and another is just 20 centimetres. The size of the brain.”

Round 3 of Rotax Max Challenge Asia & Malaysia was held at the Speedway PLUS circuit in Subang, Malaysia, on 18-19th May under scorching hot weather throughout the two days of racing.

This first visit to the track since last year gave drivers a lot to cope with and a new chance to shine.

When in some latitudes, the winter months mean that kart radiators have to be covered, increasing tyre temperature or wearing something else under the driving suit (or staying at home due to snow) one would rather be on a track at the Canaries, surrounded by palms, warm weather… in environment and body.

HOW IT’S MADE – Hubs & bearing holders

A few important accessories are required to make the rear axle “work”: let’s take a look and see what they are like and how (and why) hubs and bearing holders are made.

There are many details, many things that those who love karting and have been practising it for a long time do almost automatically, without thinking, some of them are even thought to be natural. However, these operations are not natural for newcomers to karting, those who have just stepped into this fantastic but also dangerous world. Let’s see if we can give you all some advice so that the first time won’t be… your last time.

Met at a vintage kart event in the USA, Jack Spitler, now 77, recalled his trip to Europe during September of 1961 as a member of the Grand Prix Kart Club of America team managed by ‘Red’ Crise. Then the races in England, Italy and Nassau constituted the 1961 World Championship for single and dual engine karts. 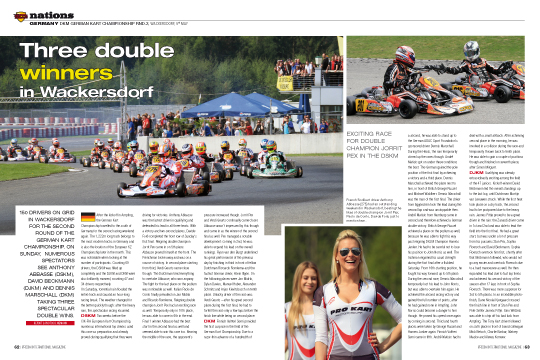 Full-time racing calendar for pretty much everyone in the globe. We start with the second round of the BNL Karting Series (Belgium) and of the DKM (Germany) with some tough racing. Then the Polish and Portuguese championships get going, while the Australian CIK Stars of Karting stops at Bolivar Raceway for round 2. Last but not least, Japan opens up its KF1 & KF2 national championship at Lake Biwa. 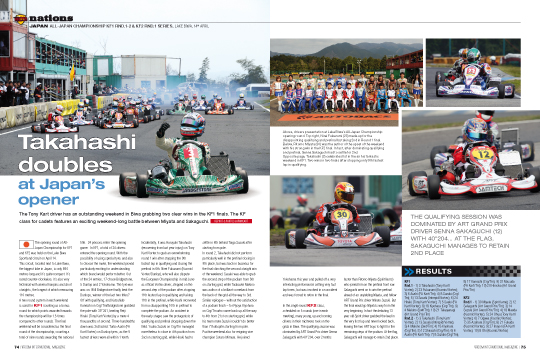 VroomMama, the column dedicated to our younger readers, talks about trust and few tips for parents.

In our closing column, the national and international calendars for the month of July, we list 31 national events from 15 countries, as well as 5 major international races.